Are you a World War II buff? If that’s the case, Germany has some of the most famous sites and ruins of any country amongst the axis and the allies. Many of the monuments, facilities, and landmarks left by Nazi Germany and the Third Reich were bombed and destroyed during the war, and many of these ugly reminders of the war were later destroyed. Even so, many key landmarks are still standing, to serve as a reminder to the German people and the world of one of the most devastating wars humankind has ever witnessed.

These are famously known as the places that Hitler took refuge during the war. He eventually ended up living here toward the end of the war. These bunkers were designed to serve as a protective air-raid bunker for Hitler, as well as his close family and personal guard.

Some of the most famous and most visited ruins and memorials from World War II serve as reminders from the brutality of the Holocaust. The ruthless Third Reich was responsible for the death of 6 million jews in the Holocaust, over the course of the second world war.

The Holocaust memorial in Berlin is one of the few memorials that commemorate the senseless, discriminatory slaughter of the Jewish people. The Holocaust Memorial in Berlin is a site that spans nearly 5 acres. It is a beautiful yet solemn memorial that was designed by the brilliance of engineer Buro Happold and architect Peter Eisenman, serving as a tribute to all Jewish victims in the Holocaust, as well as their families.

The Soviet War Memorial in Berlin was erected to honor the fallen Soviet soldiers of the battle of Berlin. The battle took place in 1945, near the end of the war. The statue at the memorial really evokes the emotions of sadness from the battle and from the war as a whole.

There is a statue at the memorial of a Soviet soldier, holding a sword and a German child. The soldier is standing over a shattered swastika. The area leading up to the monument and the statue itself is lined with 16 stone vaults or sarcophagi to represent the 16 Republics of the Soviet Union. Each of these 16 vaults have military scenes etched into them, along with quotes from Joseph Stalin that are written in both German and Russian.

Dachau was one of the first concentration camps constructed under the rule of Nazi Germany. Dachau was created to detain political prisoners from Austria and Germany, along with thousands of Jewish prisoners.

The memorial in Dachau was redesigned in 2003. How it is laid out, the memorial actually follows the path that new arrival prisoners walked when they were processed into the camp. Two of the original barracks were actually rebuilt to commemorate those that were killed in Dachau, and one of them outlines the entire history of the concentration camp.

Nuremberg is the location of the Nuremberg Trials. The site and the event where the judges of the allied powers passed made 22 major Nazi war criminals stand trial. 12 of which were sentenced to death for their atrocities during the war.

Nuremberg is also the site of the Nazi Party Rally grounds. This assembly site spans 11 square kilometers, and were created to host rallies of the nazi party. Six of these rallies took place on the Nuremberg Rally Grounds between the years of 1933 and 1938. Pieces of some historic buildings are still standing on the site of the rally grounds, and many of them have been preserved to serve as a memorial from the war.

There are many churches dedicated to St. Nicholas, around the globe, but the one in Hamburg, Germany is unique for several reasons. The first being that it was actually at one time, was the tallest building in the world for the two brief years between 1874 and 1876.

If it was built so long ago, what was the significance of this church during World War II.

The pilots of the Allied Forces actually used this prominent tower of the church as a marker for orienting themselves in the city. This was critical for them during their air raids and strikes on Hamburg, during the war. As you can imagine, the church sustained heavy damage from the bombs that the allied forces dropped in the area. Parts of the roof of the church collapsed, but even with the extensive bombing of the area, the walls and the tower somehow remained standing.

The tower and some of the salvageable walls around the church have been preserved to commemorate the war.

The “Kehlsteinhaus” as it is known in German, or the Eagle’s Nest for the English translation, was less of a tactical position for the Third Reich and more of a recreational area. The Eagle’s Nest was actually given to HItler as a 50th birthday gift. It became a retreat and vacation home that he would use to entertain and host guests and their friends.

The Eagle’s Nest has been preserved and is fully standing, unlike many other memorials, monuments, and ruins from the war. It has beautiful views of the land and mountains around Berchtesgaden, and today the Eagle’s Nest is open to the public, complete with a tourist information site, a beer garden, and even a restaurant.

Germany and other regions throughout Europe are known for their architecture, and specifically their castles. Though Colditz castle is another key World War II location in Germany, the construction of the castle actually started in 1158, after Thimo the first was made Lord of Colditz by Emperor Frederick Barbossa. Throughout the Middle Ages, the castle was actually used as a lookout post for German Emperors.

When World War II broke out, the Nazi’s converted Colditz castle into a high-security prison. This prison was used to detain high profile officers and war prisoners who they believed would be at a high risk for escaping. The castle is located on a rocky area, above the River Mulde which made the Nazi’s believe that this castle would make for s difficult prison to escape from. Conversely, this prison location held the highest number of successful escape attempts throughout the course of the war.

Mittelbau is another World War II concentration camp site that is nestled near Nordhausen, in Thuringia. Though Mittelbau was only established as a subcamp in 1943, it made a reputation for itself during the war as one of the cruelest and most ruthless concentration camps in Germany. Just a year later, it was established as a main camp, with several other subcamps around it. One of the major prisoner populations of this camp were Slavic people, which the Nazi ideology marked as less than human. The Nazi prison guards would regularly work the prisoners through excruciating 14 hour days, wihtout access to adequate food, beds, water, and hygiene. For that reason, roughly a third of the prisoner population of Mittelbau died.

By the early 1950s, most of the main prison camp had been demolished, but locals of Nordhausen began redesigning the area around the crematorium to make a memorial and cemetery.

After the war, the site was used as a dump site for rubbish and garbage, but in 2005 the country reopened the bunker and redesigned it to include a museum that is open to the public.

During the war, the Peenemunde Military Testing Site became one of the most advanced technological facilities in the world. This is the site where Germany and the Nazis developed and tested various types of guided missiles. One of which was the V-2 missile that they fired into space in 1942. The Nazi’s goal with this military testing site was to develop and leverage advanced weapons technology to exercise superiority over military foes.

After the technologies were developed, the construction of the rockets were mostly done by inmates, slave laborers, and prisoners of the concentration camps. Though this facility sustained frequent attacks and bombings from the allies during the war, the museum for this historic site was built in the power station of this weapons development and testing site.

Though this is more of a geographic location than it is ruins that were left from the war, Hurtgen Forest carries the weight of some considerable historical significance. The battle that took place in Hurtgen Forest was the longest recorded battle that took place in Germany during World War II. The battle spanned months, starting in September of 1944 and ending in December of that year. The US First Army suffered from the battle, with a total of 33,000 soldiers that were either killed or wounded. Some records estimate that number is closer to 55,000. The Germans lost roughly 28,000 soldiers in this arduous battle. In the forest, you will find a military cemetery and a monument that was actually built in memory of a German lieutenant, that escorted a wounded American Soldier safely through a minefield during the battle.

The Konigplatz is yet another location in Germany that the Nazi Party used to amass their rallies. Originally, the Nazis had constructed two temples that honored and housed the remains of 16 Nazis that had died during the war. The Nazi Party believed them to be martyrs for their efforts. The US Army demolished both of these after the war, and the only things that are left standing are the platforms that the temples were built on.

The history of the Feldherrnhalle is interesting. It was the site of a Nazi coup against Bavaria back in 1923. During a brief fight (Known as the Beer Hall Putsch), 16 members of the Nazi party were killed. The same 16 that were housed in the temples in the Konigsplatz. When HItler in the Nazis took power in 1933, he turned the hall into a memorial to those Nazis that were killed in the Beer Hall Putsch. 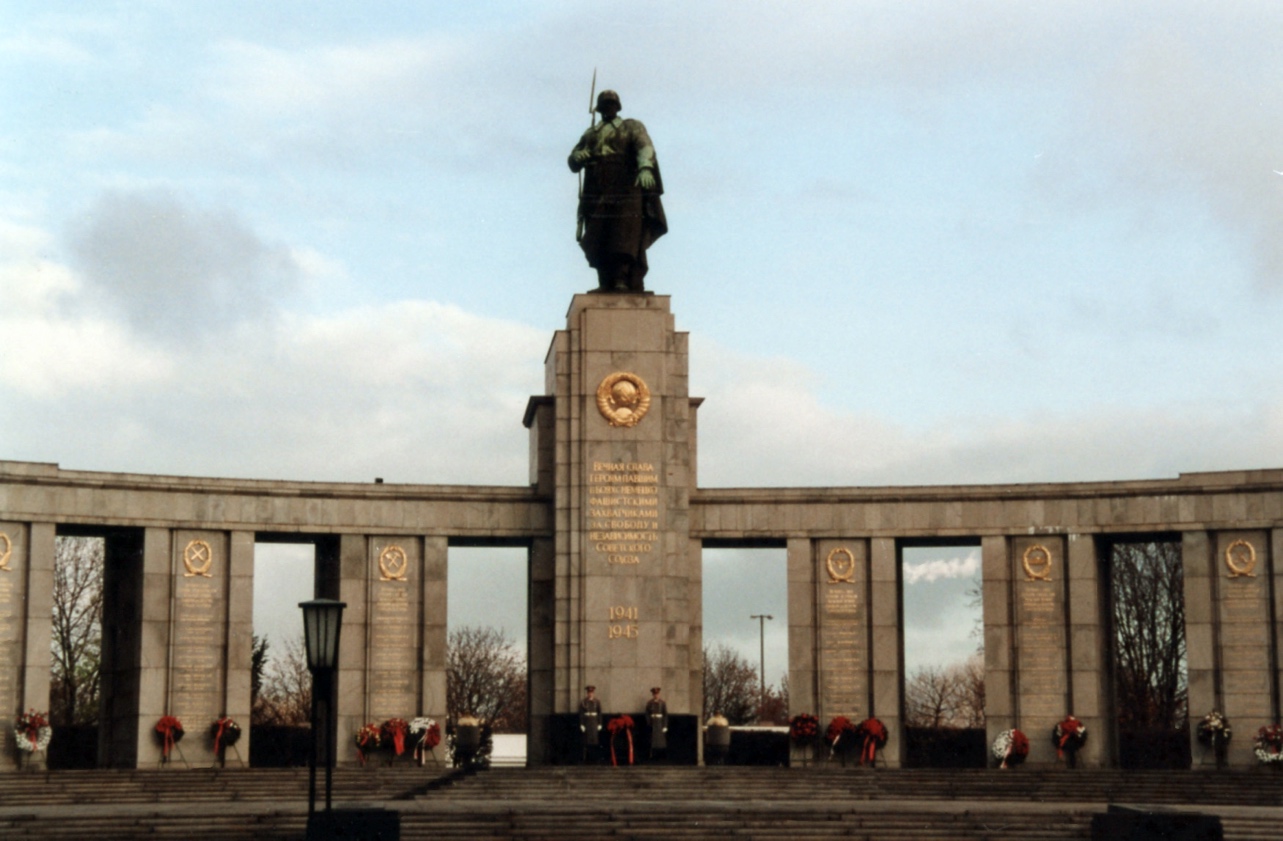 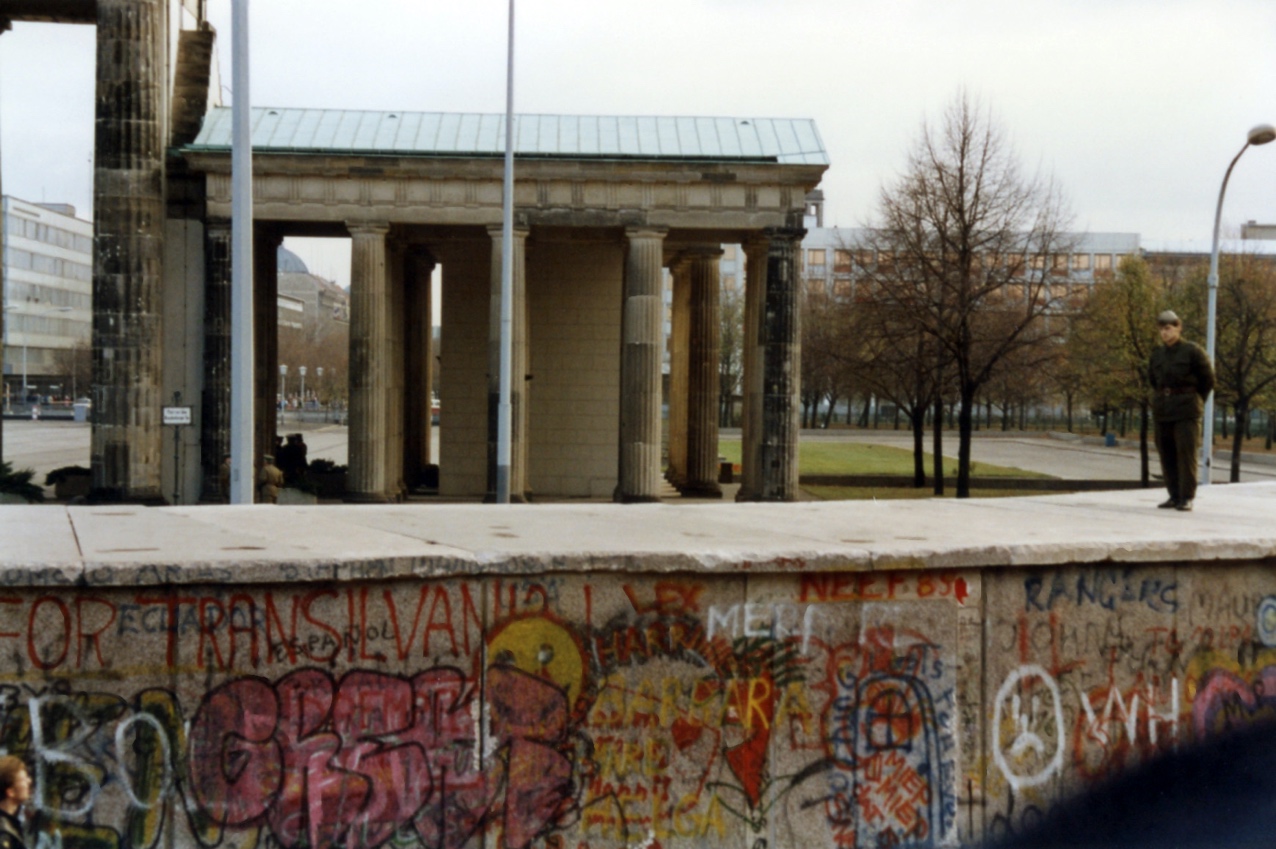 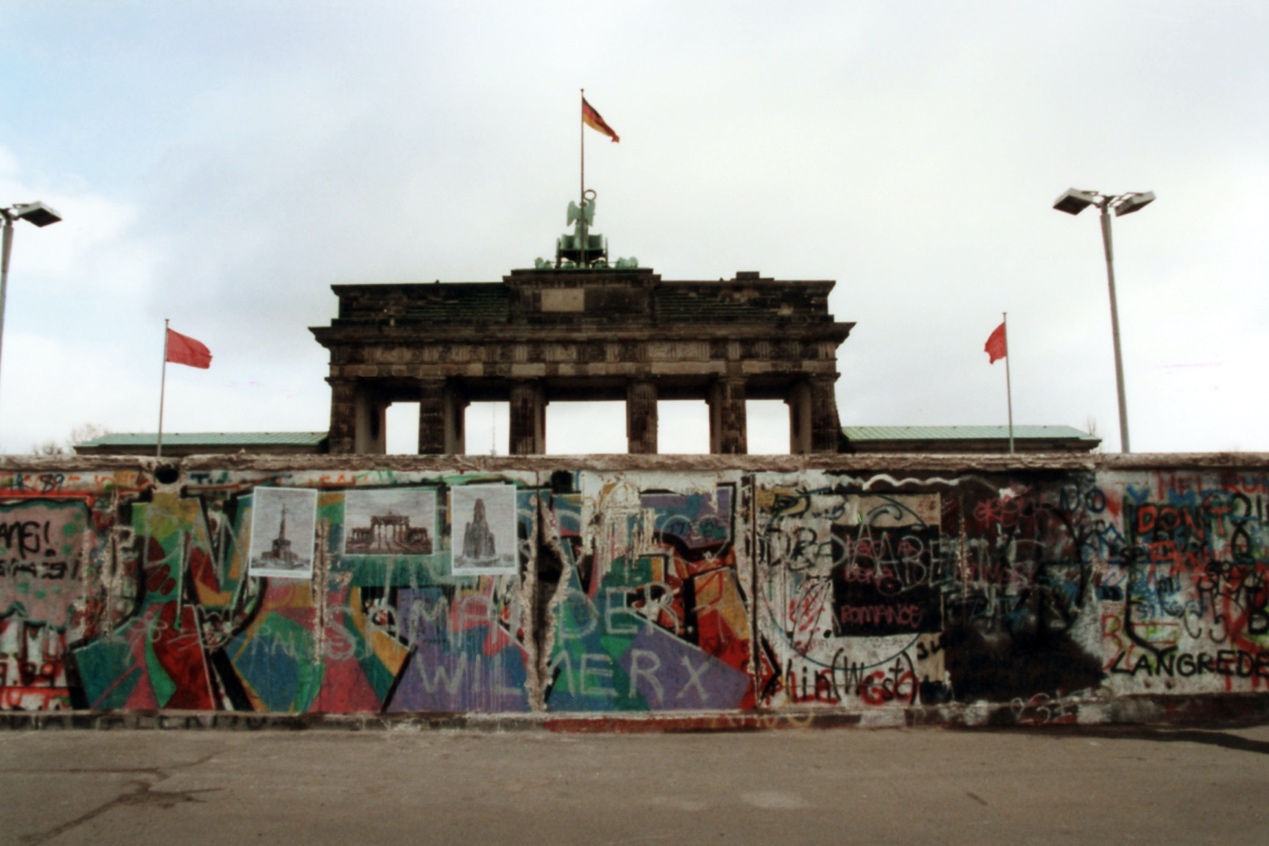 Berlin Wall a few days before it’s fall in November, 1989.

I took the above pictures when I happened to be in Berlin, November 1989 during the fall of the wall. It was an incredible experience!

I took a taxi to Brandenburg Gate. There were news crews with cameras on cranes and large crowds. The wall itself was much bigger than I thought. Near the Brandenburg Gate, the wall was maybe 10 feet wide. There were armed East German soldiers marching on top of the wall.

I recall that looking from the West into the East was like looking at a color photograph, then looking an older black and white version of the same photograph. East Berlin looked to be a cold, grey, dark and foreboding place.

In West Berlin I saw familiar looking cars, Mercedes Benz, Volvo and other western European cars. The East Germans were being allowed to drive into West Berlin and I recall that the East German cars looked and sounded like small toys compared to the cars of West Berlin.

I was able to walk up to the wall, which by now was covered in graffiti, and touch it. So, I can say that I was able to touch the Berlin Wall as it was coming down.

I had nearly forgotten about my brief visit with history in Berlin at the Brandenburg Gate until I came across the old photographs. What was my one twinge of regret? I did not bring home a piece of the Berlin Wall. It would have been very easy. Kids were taking sledgehammers to the wall and there were small pieces available and this was before TSA security at airports.

But that is okay – I have my memories and the photographs of my day with history.