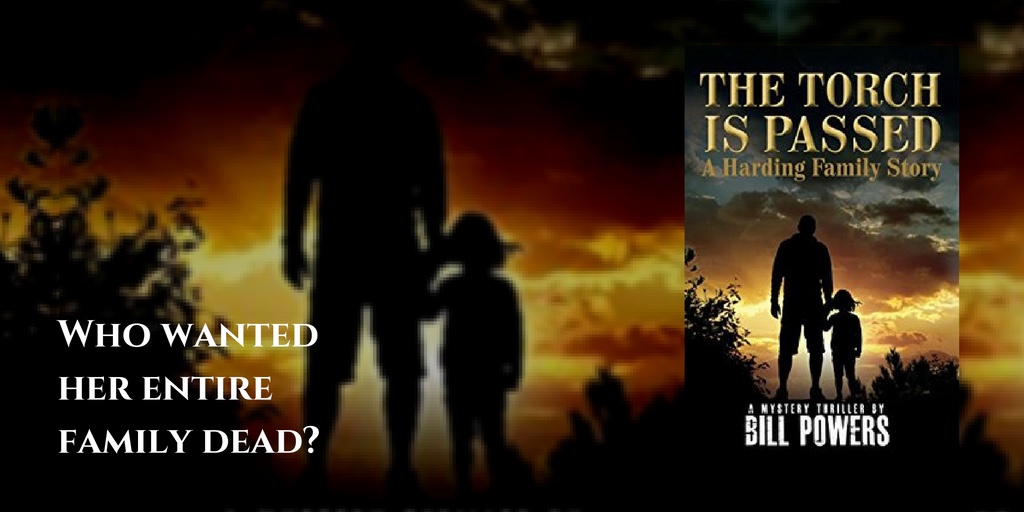 This is a composition of several (six!) book reviews for The Torch is Passed in 2016.

Treat yourself to some great summer reading with these two books available in both print and e-books by Bill Powers   – “The Pharm House” and “The Torch Is Passed.” These page-turners will keep you firmly planted on your beach towel at the shore, or your sleeping sofa on the back porch of your mountain cabin for hours – but it will only seem like a minute!

Almost three years ago, Powers burst onto the fictional writing scene with his first and highly acclaimed novel, “The Pharm House,” which was a finalist in the Medical Thriller category of the 2014 National Indie Excellence Awards. “The Pharm House” introduced readers to the Dr. Nicholas Harding family and a mystery involving malpractice, greed, murder and corruption. A re-edited version was re-issued in September of 2015.

This past year, in 2015, a sequel to the Harding family saga continues in “The Torch Is Passed,” with the challenges of Nicholas’s daughter Andrea who has inherited the family business through the murder of her family. Having just graduated college, Andrea not only has to run the family business, she must also solve the mystery of who would want to kill both her father and her uncle – and why.

In “The Torch is Passed,” emboldened by intriguing new friends and allies, Andrea sets off on an onerous undertaking to find answers – the true answers – of who and why her family has been so viciously attacked as she struggles to preserve the family business.

According to online book critic Patricia Day’s review of “The Torch Is Passed,” which she gave 5 stars, “This is a fast-paced story of greed, murder, and ambition. Thrown into the mix are characters from the Russian mob, whose cold, calculated methods to annihilate anyone crossing their path leave you breathless, and you have a book that will grab you from the very first page. It is a tale of corporate greed and misguided trust and broken trust. I enjoyed this book very much. There’s a lot of detail, but the characters are strong and you quickly determine whose side you are on. Well written.”

Bill Powers came to authorship from 26 years in pharmaceutical research with the Johnson & Johnson Company in north-central New Jersey. Both his parents were teachers and had great influence on his love of language, communication and story telling. With a Doctorate degree in Toxicology, and this wealth of experience in pharmaceutical research, Powers has morphed himself into a substantial writer of mystery and intrigue adeptly and forcefully crafting well-told stories rife with cunning and the art of the surprise reveal.

Z’Scoop recommends you read both books in order of publication – first “The Pharm House” and then “The Torch Is Passed.” You’ll be glad you did!

The Torch is Passed: A Harding Family Story is written by Bill Powers. Having just graduated college, Andrea finds her world ripped apart when two family members are shot. Her father is one and, with his life hanging in the balance, she must take control of the family business until he recovers. Business partners, Carlton and Jefferson of Oakes Industries make a play to not only take over but own Harding Industries. They offer a staggering amount of money in an attempt to obtain control, but fail despite the amount offered. Why would they be prepared to pay so much for a company worth much less?

Andrea is fast-tracked to adulthood as the world she once knew vanishes. An attempt on her own life leads her to find trusted support in Beth and Riva. Both women are powerfully able to defend and protect not only Andrea, but also those she holds dear. Her determination to keep Harding Industries intact for future growth, takes her along violent pathways, meeting very disagreeable, volatile people.

This is a fast-paced story of greed, murder, and ambition. Thrown into the mix are characters from the Russian mob, whose cold, calculated methods to annihilate anyone crossing their path leave you breathless, and you have a book that will grab you from the very first page. It is a tale of corporate greed and misguided trust and broken trust. I enjoyed this book very much. There’s a lot of detail, but the characters are strong and you quickly determine whose side you are on. Well written.

Full Text: I absolutely loved this book. Most books you can tell by at least halfway through, who done it. On this one, not so much. Through the whole book, you are given bread crumbs, but not enough to find your way home. It is steady, solid, and well-paced. History buffs will love this story, there is quite a bit to it, with a lot of big names making an appearance. John D. Rockefeller to name one off the top of my head, along with some very crucial events in our nation’s history, the appearance of locomotives, the rise of the oil industry, etc. There is a lot of meat to this story which I enjoyed very much. I cannot wait to see more from Bill Powers, and would love to read Deirdre’s story. I am sure that one has an amazing tale to share.

Full Text: This is the first book that I’ve read by Bill Powers but I plan to go back and read the first book in this trilogy and am anxiously waiting for the third book. This is a suspense thriller with lots of mystery and intrigue and really bad guys who are targeting the Harding family. I thoroughly enjoyed this book and was not sure who the person was that started the chain of events that led to the shooting until the very end of the book. It was a difficult book to put down once I got started. I enjoyed the dynamic between Andrea and her friends who acted as her extended family after her father and uncle got shot and she was attacked in her own home. She started out the book as a student on her way to law school and ended up as a woman with attitude. My favorite two characters were Beth and her daughter Riva – the interplay between the two of them was so snarky that I looked forward to their scenes together. Overall it’s a great book full of interesting characters working together to solve the mystery of who wanted to wipe out the entire Harding family. (Thanks to the author and the publisher for a copy of this book for a fair and honest opinion)

Full Text: I so enjoyed this story. It would not be easy to get a couple of police at your door in the middle of the night telling you that your father and uncle had been shot and were in critical condition. Then when you think things have settled a little, you are then attacked in your own home. What do you do? Andrea Harding turns to her few friends and family members to help her find out why her father and uncle were shot. This was a great thriller and I loved the characters. I received this book from Smith publicity for a fair and honest opinion.

Full Text: I didn’t read the first book in this series, so I will admit I felt rather lost when this story began and I was like ‘who’s this?’ and ‘why’s that?’ – really felt like being plunged into an established world and I’d missed all the introductions. But little by little (it required some plodding), I was able to make sense of what’s what and who’s who, and the intrigue picked up and it was smooth sailing from there – well, as smooth sailing as a thrilling intrigue can be *grin* Lots of twists and turns; lots of things you won’t see coming…and then totally slap your face because the clues were right there and you figure out the author had been leading you there along. If you can get past the jarring start, then you’re in for a good ride. Best still to read the first book, I suppose, and get the real lay and feel of the tale.

Now available in both print and ebook