In case you didn’t know, November is National Novel Writing Month (NaNoWriMo). With authors all over the country participating, it got us thinking – how does one go about writing a novel, anyway?

While there are plenty of genres out there to choose from, the fact that Halloween comes just before NaNo starts seems like as good an inspiration as any. So, for this post, we’ll be looking at how to write a suspenseful thriller novel.

A few conditions, though, before we begin. First, this post is meant to be a set of loose guidelines, not hard and fast rules. Writing is fluid and flexible – focus on what works best for the story, not checking off boxes. Once you understand these guidelines, you can break them or ignore them however you see fit.

Second, even by following guidelines, there’s no guarantee that a story will be particularly suspenseful or thrilling. Writing is also subjective – some readers will get into it while others won’t. It’s imperative not to get discouraged, as you can’t write for everyone.

Finally, learning how to write a suspenseful thriller novel is just the first step. We can provide you with all the tools, but you still need to create the foundation and the story itself. Also, this isn’t a guide on “how to make millions by writing suspense novels,” so keep that in mind.

Now that we’ve gotten that out of the way, let’s begin!

By the Book: What is a Suspenseful Thriller, Anyway?

Before we can get into the nitty-gritty of how to write this kind of novel, we should understand the elements that make a suspenseful thriller. Here are the “official” definitions of both suspense and thrillers.

Another crucial point to keep in mind is that the term “thriller” is relatively vague, meaning that not all of them can be classified as “suspenseful.” However, using these definitions, we can craft a general outline for how our novel should go. 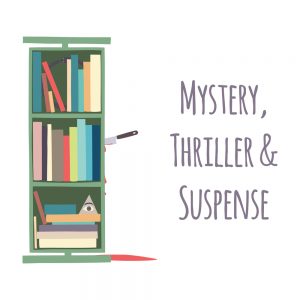 Unfortunately, suspense is something that can be difficult to master, but that doesn’t mean we can’t get into how it works and why. Here are a few core components that should be included when building a suspenseful scene, chapter, or novel.

A Character the Audience Cares About

One of the most valuable pieces of suspenseful writing is the emotion tied to the character involved. Simply put, the audience isn’t going to care if a no-name background extra gets killed. In fact, that happens all the time. Instead, the reader needs to have some kind of emotional attachment for the suspense to work.

For suspense to work well, the stakes have to be high. If the dreaded outcome is that our protagonist is late for school, what’s the consequence of that? If it’s nothing major, then we can’t have suspense. Instead, raise the stakes, so the reader cares more. For example, perhaps being late to school means expulsion for our protagonist.

Suspense and tension are somewhat similar tactics. Both are centered around a feeling of dread regarding what “could” happen to a particular character. However, there is a critical distinction between the two.

With suspense, the dread may or may not be based on evidence. If a character we like is creeping around a “haunted” house, the reader may anticipate that a ghost or ghoul will appear, even if nothing like that exists in the story’s narrative.

With tension, however, the reader is presented with enough information to draw a particular conclusion. The tension rises as the character moves closer and closer to that conclusion. Using our haunted house example, we can build tension by showing a serial killer roaming the halls, looking for his next victim. As we see our protagonist and the killer moving closer together, we’re afraid of what might happen, so the suspense (and tension) builds.

Simply put, suspense can be built around the unknown, whereas tension is more grounded.

Writing suspense and tension requires a certain ebb and flow. However, just as crucially as building suspense is paying it off. If our protagonist is in the same house as a serial killer, what happens next?

One excellent way to visualize this is by blowing up a balloon. The more air goes into it, the more likely that it will pop. Eventually, we’ll need a release. Either the balloon pops, and we get that burst of excitement and action, or we deflate it. Obviously, the latter option is much more thrilling, which is necessary for our novel.

So, that means that our payoffs need to be exciting, not dull. Promising high-stakes action isn’t worthwhile if nothing ever comes from it. If our protagonist leaves the haunted house and the killer never knows that he was there, what was the point?

One crucial thing to understand as well is that the payoff doesn’t have to be massive. Our protagonist doesn’t have to get into a final showdown with the killer. Perhaps they come face to face, but something prevents the killer from making his move. So, he plans to murder our protagonist later on. We’ve paid off the tension of the scene without making it climatic, but still preserving some of it for the rest of the story.

Throughout our suspenseful novel, we need to create this ebb and flow. Introduce suspense into a particular scene or chapter, and then pay it off somehow. If we keep “deflating the balloon” of each scene, then the reader will get bored.

Now that we understand the core components of suspense, we have to figure out how to incorporate them into our novel. But first, we need to know what it takes to write a book altogether. Here are a few guidelines.

When writing our novel, we need to have an overarching storyline that moves the reader from one point to the next. The plot can be big and bold (saving the world), or it can be more personal (graduating college). However, because we have a lot of room to explore in a whole novel, we will need to utilize subplots as well.

A subplot is a secondary (or tertiary) storyline that happens in addition to the main plot. While our protagonist is trying to graduate college, his sister is trying to be a stage actress. Creating multiple plotlines in a novel can make it more enticing to the reader. In all cases, you need to create some kind of payoff, rather than leaving plot threads hanging by the end.

A Progression of Events

To make a more compelling novel, one has to have elements that drive the plot forward. Scenes should build upon each other, delivering the reader to the next one naturally and logically. Otherwise, we’ll have a collection of scenes with a loose association, which can feel meandering and boring.

Using our haunted house example from above, that scene could feed into another scene where the serial killer starts stalking our protagonist. From there, our protagonist starts noticing the killer in different areas, so he starts to get paranoid and nervous. He calls the police to report the behavior, only to discover that the killer is an officer!

In that case, the progression of events makes sense and moves forward smoothly. Usually, when a writer hits a wall, it’s because nothing is driving the plot to the next scene. What can help alleviate this situation is to outline the main story and subplots so that you know where everything is going. Then it’s just a matter of filling in the details.

Bringing it All Together: Writing a Suspenseful Thriller

By this point, we have a bunch of different elements that can come together to create our novel. Here are a few additional tips to help you flesh everything out.

Characters Drive the Plot, Not the Narrator

In many stories, it’s easy to move the protagonist from one place to the other because that’s how things are “supposed” to go. However, the protagonist should be acting on his own. An excellent way to address this problem is to ask, “why?” Why is he at the haunted house in the first place? Why does he call the police?

It’s also crucial to answer these questions for your antagonist as well. Why does the killer want our protagonist? Why does he keep killing? Figure out the answers from the character’s perspective, not yours as the writer.

If you have a story with non-stop suspense and tension, it will become too overwhelming. Don’t be afraid to take a break with some comic relief or less-stressful situations. You want to have moments where your protagonist and antagonist are “at rest.” Just make sure that these breaks don’t slow the plot too much.

Use Conflict to Move the Plot

One of the best ways to advance your story is through conflict. The best way to use this is to have it be a catalyst for change. If our characters are in the same spot they were before the conflict, then what was the point? Otherwise, it was just drama, in that it didn’t affect the plot.

Finally, to make a good suspenseful thriller, there has to be a climactic moment when everything comes to a head. Our protagonist faces off against the killer in a cat-and-mouse game, where only one can emerge victorious (and alive).

The key to creating this do-or-die moment is to eliminate all other possibilities. The killer has trapped our protagonist in a warehouse, where the only escape is a key on the killer’s waist. Rescue isn’t an option because no one knows that our protagonist is there. Each of these elements is another blow into the balloon. Eventually, it has to pop.

Overall, writing a suspenseful thriller is all about finding the right balance of tension and payoff. Experiment with different scenarios, and keep in mind that your plot may change or adjust as you go. Having a clear endpoint in mind is good, but you don’t want to get locked into it. Let the story dictate how it ends.