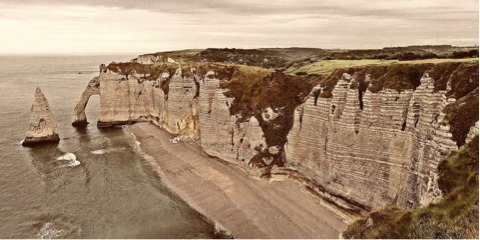 As the deadliest and most destructive conflict the world has ever seen, World War II serves as a reminder of what can happen when military giants decide to go head to head. Although it’s been over 70 years since the war ended, scars of the conflict remain to this day. Looking at these sites through a modern lens can give us a glimpse of what life was like under the constant threat of military action.

World War II was fought on many battlefronts, but today we’re going to focus our attention on Great Britain. The British Isles served as an instrumental staging area for Allied forces during the war so that they could launch the greatest offensive of all time to recapture occupied European territory.

We’re going to look at numerous ruins while diving into their history and importance during the war (and beyond). Step into our Wayback machine, and let’s see how World War II shaped a nation.

During the early years of the war, Nazi Germany was storming across Europe, finally reach Britain’s doorstep. Once France had succumbed to the Wehrmacht, it looked like the Germans would launch a full-scale invasion of the island nation. Afraid of what that could do for the war effort and the Allies (considering that the US hadn’t officially entered the conflict), Britain had to act.

Field Marshall William Edmund Ironside drafted a plan to protect England’s coastline with a series of tunnels, gun emplacements, minefields, and anti-tank obstacles. This network would be known as the “Coastal Crust,” and one site that remains to this day is the fortification at St. Margaret’s Beach.

Here you can see remnants of a tunnel system that was dug into the cliffside. Several pillboxes were installed within the rock to cover the beach from a potential invasion. The entrance to the tunnels was sealed years later, but intrepid explorers can access them from the gun turret.

Nearby, there is the St. Margaret’s Museum, which dives deeper into the strategic importance of the beach and how it played a part during the war. Dover was an important location for both the Allies and the Germans, and it will show up multiple times on this list.

The Secret Tunnels of Dover

Depending on which side you were on, the battle of Dunkirk was either a rousing success or a rousing success. Allow us to explain – as the Nazis marched into France, Britain and other allied troops tried to fend off the Blitzkrieg. Unfortunately, the Germans were too well organized and equipped, forcing the Allies to retreat to the beaches of Dunkirk. Almost 350,000 men waited there for rescue while enemy forces neared closer and closer.

Unfortunately, although Britain has one of the finest navies in the world, most of it was occupied elsewhere. Not only that, but the British were still preparing for war, so they had massive personnel and equipment shortages at the time.

To help expedite the evacuation, hundreds of civilian boats were pressed into service, including pleasure yachts, lifeboats, tugboats, and others. Over 800 “little” ships arrived in Dunkirk to ferry the soldiers across the English Channel to Dover. These tunnels were dug into the white cliffs to help the men get off the beaches and back to civilization.

Both sides considered the battle a success. For the Germans, it meant driving British forces out of Europe, as well as capturing massive amounts of guns, vehicles, and other equipment left behind. For the British, they were able to recover several battalions worth of men, who would come in handy later during D-Day.

At this site, you can explore an exhibition recalling the events of the campaign, called Operation Dynamo.

As the German Army started performing air raids on London and other English cities, they were able to use the Thames River as a guideline, particularly at night. To help protect the river and its surrounding environs, the British Army and Navy constructed a series of fortifications along the river’s estuaries.

These forts would be called Maunsell Forts, named after Guy Maunsell, the architect who designed them. There were four navy-style and four army-style structures constructed in strategic points throughout the estuary. One of the only ones currently accessible is the army-style fort at Red Sands.

The Red Sands fort is a series of seven towers, each connected by a metal walkway. Being an army-style structure meant that soldiers could man turrets on each of the six outer towers, watching for enemy boats and opening fire as necessary.

After the war, these forts became hubs for pirate radio stations in the 1960s, having been decommissioned in the late 50s. Currently, a nonprofit organization is trying to restore and preserve the Red Sands Fort for historical purposes.

War can inspire the most creative minds to build all kinds of impressive structures. However, while some of them can become instrumental in turning the tide of battle, others, like the Denge Sound Mirrors, can become obsolete, serving as a monument to the “build first, ask questions later” nature of global conflict.

Interestingly, though, the “mirrors” were built during the interim between World War I and II. From 1914 to 1939, a series of concrete structures dotted the coastline surrounding Kent. Each structure was designed to capture soundwaves from incoming aircraft and focus them on highly sophisticated listening devices. The idea was that groups stationed along the mirrors could identify aircraft before they were in firing or bombing range, allowing the British to scramble a rapid response.

Unfortunately, by the time the first set of mirrors was finished and tested in 1930, radar was starting to become a thing. Construction of the mirrors continued, but once World War II began, they were all but obsolete. Today, only a few of them remain, and you can take a guided tour explaining how they worked and why they were built.

The Battle of Britain was a devastating point of the war for England and the Allies. German planes bombarded cities all along the coastline and up the Thames River, including London, Dover, and Kent.

To help protect its civilians from these raids, the government built many underground facilities. While Londoners could escape the bombs by hiding out in subway stations, those who lived in Kent and the surrounding area came to Chislehurst.

This cave system is massive, as it could house up to 15,000 people at a time. In addition to the usual refinements (beds, restrooms, and mess halls), Chislehurst was also home to a movie theater, a barber, and three canteens so that locals could still get a spot of tea. There was a Red Cross hospital built inside, staffed by one doctor and two nurses. Fortunately, the hospital wasn’t overrun with casualties, but one girl was born there during the war.

After World War II, the caves were closed, although they reopened in the 60s as a concert venue. Today, there is a guided tour of Chislehurst that delves into the history of the Battle of Britain. Guests can also see replicas of the accommodations that residents had to use at the time.

Air superiority was a crucial point during the war, as the country with the best planes and pilots could dominate the skies. Bombing raids and dogfights were a constant part of World War II, which meant that all countries involved had to have various airfields and training grounds for their men.

For the Royal Air Force, Upwood served as one of those training grounds. The site was first built during World War I, although the runways, hangars, and other buildings were not permanent installations.

Between the wars, the Royal Air Force realized that they needed to expand and upgrade their operations, so Upwood became a staging area for many new planes and pilots necessary for the war effort. The airfield saw action twice during Luftwaffe bombing raids, but fortunately, there was only one casualty.

Post World War II, Upwood became a training ground for the US Air Force, who used it throughout the Cold War. Since the mid-90s, the site has been abandoned, and you can explore the ruins of the former base.

If you’re not familiar with the acronym, ROF stands for Royal Ordinance Force. Bombs and other munitions were essential for the war effort, and countless ROF sites popped up across Britain both before and during World War II.

Wrexham is located in Wales, and the ROF quickly adopted the industrial site at the beginning of the war. Wrexham was chosen for a couple of reasons. First, it was far enough away from Germany to be less enticing as a bombing site. Second, the area had a good railway network, enabling the ordinance to be shipped wherever it was needed.

To help protect the site from reconnaissance and attack, British forces spread the complex over a wide area. Farmland and agricultural buildings were left standing so that it would appear less like a munitions factory. Many of the ROF structures were also camouflaged to help avoid detection from spotter planes. Defensive pillboxes dotted the area, and an airbase was nearby to help defend both Wrexham and other military installations.

Wrexham mostly produced cordite, a substance used as fuel for various artillery shells. After the war ended, cordite production halted. Today, the site is home to many different businesses, as newer buildings were constructed in the 1950s. Remnants of storage towers and pillboxes can be seen and explored, although there are no guided tours.

Because air raids were so prevalent during the war, countless shelters were built in strategic areas throughout the country. Airbases, like the one at Biggin Hill, required sturdy concrete structures to protect the personnel whenever the Germans would come knocking.

Biggin Hill was attacked several times throughout the war since it housed an RAF squadron. An air-raid shelter was built into the side of a hill nearby, which was large enough to accommodate around 40 people.

During the war, the British government allowed military men and women to share their stories on the radio as a means of boosting morale and providing personal insight into the war effort. One woman, Felicity Hanbury, recalled two bombing raids at Biggin Hill on August 30th, 1940.

“As I entered headquarters, the sirens wailed, and we were told to go to the trenches. A few seconds later, we heard one squadron roar into the air, then another, then still another, and finally, the civilian air-raid warnings sounded in the surrounding country. We laughed and chatted on our way to the trenches, as this was no unusual occurrence.”

Hanbury survived both raids, and Biggin Hill was never out of action. Several buildings and hangars were destroyed, along with phone lines, but the base remained operational throughout the war. Similar air shelters, however, were not so lucky. The government wisely decided to forgo sharing those stories so that civilians would not be dissuaded from using shelters altogether.

Although the ruins of this church consist mostly of the entryway and a few feet of walls, they have a long and impressive history. It was built in the 11th century, and restored in the 1800s. The church also served as a meeting place for the Barons of the Cinque Ports, although their last congregation was in 1851.

It’s interesting to think that a building like this stood for so many centuries, only to be destroyed so swiftly in modern times. The church was first damaged during World War I, when a seaplane dropped bombs on the nearby city, causing debris to hit the roof.

Although St James’ church was restored in 1931, German artillery destroyed much of the building during World War II. Firing across the English Channel, the Nazis had decided to target British cultural sites, including ones like this.

After its destruction, the church remained in ruin, with the main bell tower collapsing in 1951. Afterward, other parts of the structure were demolished in 1953 for safety reasons. Today, it serves as a “tidy ruin” that visitors can explore at their leisure. 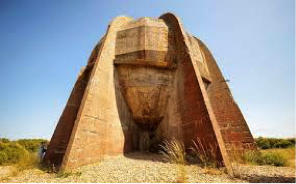