A couple of years ago, when I saw that the American Museum of Natural History in New York, was running an exhibit entitled, “The Power of Poisons”, I just had to attend. Why you might ask. It all started when after my sophomore year of college; I took a part time job in a toxicology laboratory at the National Institute of Environmental Health and Sciences at the Research Triangle Park in the Raleigh-Durham, NC area. Well, it was love at first sight – toxicology; and me and we have been together ever since! In case you may not know, toxicology is a discipline incorporating biology, chemistry, pharmacology and medicine that involve the study of the adverse effects of chemical substances on living organisms; i.e., the study of poisons. The word toxicology comes from the ancient Greeks and Byzantines, meaning poison and study of. I went on to the University of Cincinnati to get a Masters and Ph.D. in toxicology and then, you may not believe this, figured out a way to get paid to study poisons! Is America Great or what! How, you ask did I pull this off? Here’s the secret – technically, everything is a poison, it’s just a matter of the dose!

Where are poisons found?

How do poisons work? Poisons are defined by the systems that they effect.

Here are just a few other poisonous animals…

Golden Poison Frog:  The golden poison frog is considered one of the most toxic animals on Earth. A single specimen measuring two inches has enough venom to kill ten grown men. The indigenous Emberá people of Colombia have used its powerful venom for centuries to tip their blowgun darts when hunting, hence the species’ name.

Scientists are unsure of the source of this frog’s amazing toxicity, but it is possible they assimilate plant poisons, which are carried by their prey. Poison dart frogs raised in captivity and isolated from insects in their native habitat never develop venom. 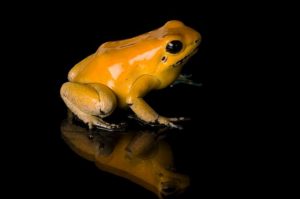 Wandering Spider or “Banana Spider: Remember those panicked reports of people finding deadly spiders-perhaps the deadliest on Earth-in bunches of bananas? Those reports referred to the Brazilian wandering spider, whose bite can cause severe burning, sweating, and goose bumps followed by high or low blood pressure, nausea, hypothermia, blurred vision, vertigo, and convulsions.

The Guinness Book of World Records considers the Brazilian wandering spider the most venomous in the world. Hundreds of bites are reported annually, but a powerful anti-venom prevents deaths in most cases. 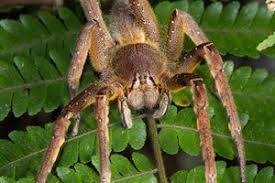 The Giant Silkworm Moth Caterpillar (see the little cutie below) is a species of moths from South America. It is famous for its larval form, rather than the adult moth, primarily because of the caterpillar’s defense mechanism, spiny bristles that inject potentially deadly venom. The caterpillar has been responsible for many human deaths, especially in southern Brazil. 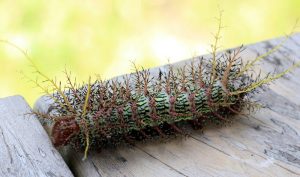 So, remember, everything is a poison; it’s just a matter of the dose! And before you pickup some cute little crawly thing; some poisons come in very cute packages…