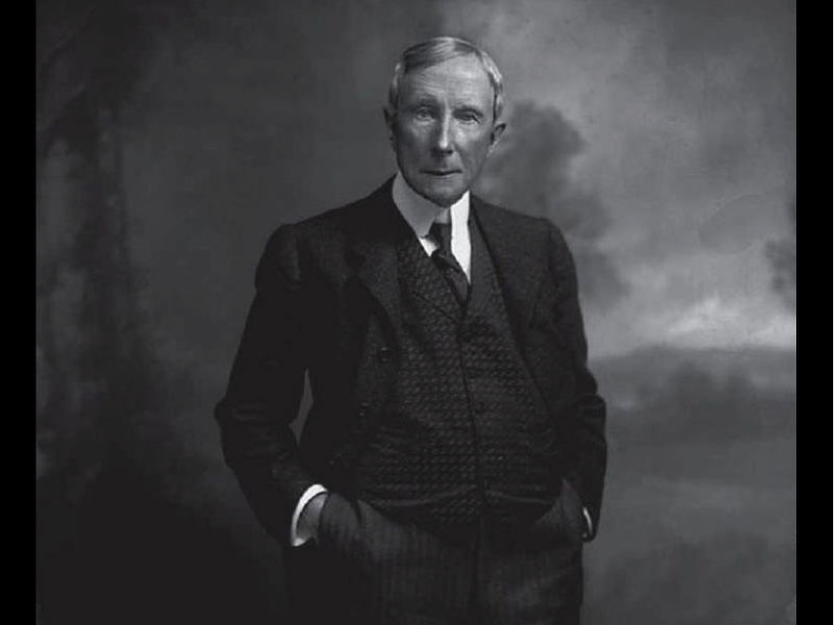 John D. Rockefeller is widely considered one of the wealthiest people in American and human history, but how was he able to amass one of the largest fortunes that the world has ever seen?

John D. Rockefeller was born to William Rockefeller Sr. and his first wife Eliza Davidson in upstate New York on July 8th, 1839. John was born into a large family and was just one of six siblings in this marriage, including his brother William Rockefeller Jr. who would end up cofounding Standard Oil with him.

One of the most commonly asked questions we have seen throughout history is how did the Rockefellers manage to build their empire? Unfortunately, the answer to that question is largely unknown. The Rockefellers both as individuals and as a family have chosen to keep the cumulative total of their wealth including all assets, cash, equity, family member net worths, and the estate mostly private. With that, the early growth of the families wealth is something that is uncertain, but we have found ties to land, real estate investments, and of course, the oil industry.

The Rockefeller family has made it a priority to protect their estate, the majority of which was sealed in their family trust back in 1934. They set up another trust in 1952, both of which are managed by Chase Bank. Their trusts are managed by committees within Chase that oversee and manage the fortune, while Rockefeller Financial services handles the families sizable financial investments.

Acclaimed author and researcher Malcolm Gladwell estimated that at the peak of the Rockefeller’s wealth, they would have been worth around $320 billion, in today’s dollars. That’s approximately three times the net worth of Bill Gates or three to four times that of Warren Buffet, two of the wealthiest people in history.

How did the Rockefellers build Standard Oil, and make them one of the richest families in history? 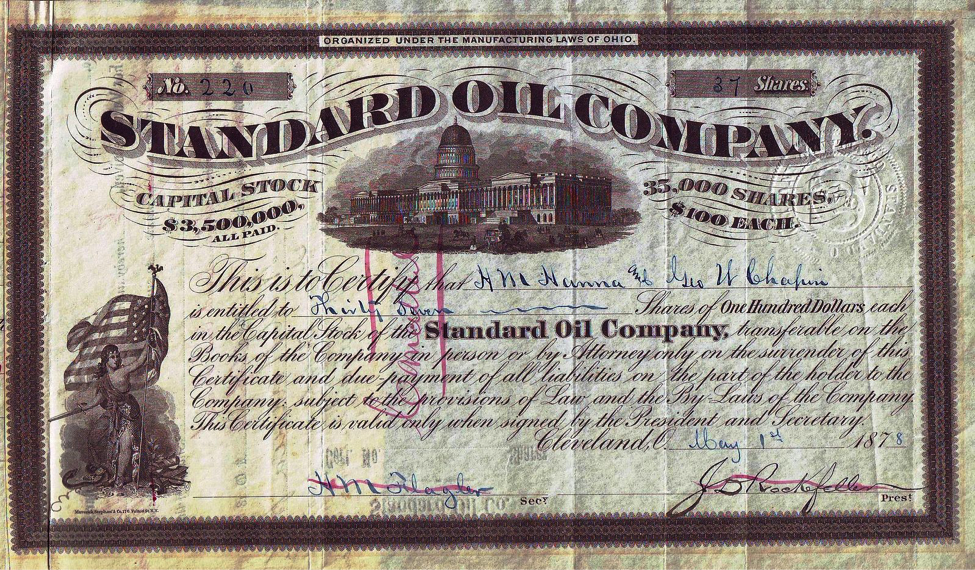 The Founding of Standard Oil

Even though standard oil wasn’t officially established until 1870, there was a lot of work that went into creating one of the largest and most lucrative oil companies and monopolies in history. John D. Rockefeller and his brother William started laying the groundwork of the company back in 1863. It was a partnership formed between themselves, Samuel Andrews, Henry Flagler, Stephen V. Harkness, and Oliver Jennings. Jennings made it into the partnership as he was married to a woman who happens to be the sister of William’s wife.

After starting off as a partnership, John later dismantled the partnership in 1870, after which they incorporated Standard Oil. The reason that they named their corporation standard oil is so that it would stand as an organization that stood on reliable product quality and service standards. He wanted to set the tone for an industry that was still very much in its infancy. They envisioned creating something new, great, powerful and revolutionary for oil.

This ideal is what lead John Rockefeller and his fellow stakeholders to create a business that would dominate the oil industry, leading the charge in innovation and unmatched success. John was the single largest shareholder in the company at the time, with William being the second most, so that they could shape and direct the company in the way that they saw fit. Though they appeared to be collaborative in their decision-making process with the other stakeholders and founders of Standard Oil, it was apparent that John made it a priority to keep the power in his corner.

The Rockefeller’s goal was to grow Standard Oil through the acquisition of other related companies. As Standard Oil continued to grow, they would buy out their competitors along the way. Bought competitors that were deemed as beneficial to growing the standard oil empire were integrated quickly into their pipeline. Used to increase the overall efficiency and output of their company.

Standard Oil also bought out competitors that were not directly beneficial for the growth and effectiveness of the organization. They would also buy out competitors that were getting in the way but weren’t at all beneficial to the growth and expansion of Standard Oil. Rockefeller would then close down as a means of eliminating the competition and gaining greater control over the oil market.

The next step the Rockefellers took toward building the monopoly was in gaining exclusive control over oil shipping along the New York Central, a major railroad which ran through New York to Boston and then across the Midwest to Chicago and St. Louis. Rockefeller inked a deal with them in which he would give them a discount of over 70% on barrels, as long as they agreed to ship at least 60 car loads of oil per day. Not only did this lock in an enormous amount of business for standard oil, it was absolutely impossible for any other oil company to compete with that price. No other company was big enough to compete or offer that generous of a discount.

There were some other notable time and money saving tactics that Rockefeller deployed to maintain control of costs and manage prices. This included using the Erie Canal during the warmer months of the year for oil transport, to help them save on shipping costs with the rail lines which they relied heavily on throughout the rest of the year. He cut transportation deals in secret with other companies that helped drop the price of kerosene by more than 50 percent from 1865 to 1870. Those who they didn’t put out of business or buy out became heated opponents and enemies of the Rockefeller empire and Standard Oil.

Up to this point Standard Oil was well recognized as the leading powerhouse in the industry, but the depth and sweeping breadth of the power of standard oil was yet to be uncovered. Outside of Rockefeller and the key stakeholders, few had any idea just how much control Standard Oil had over their business and the oil industry.

Competition and the Sherman Antitrust Act

The assembly of the Hepburn Committee could be seen as the first step in leading toward the investigation of Standard Oil as a monopoly. A. Barton Hepburn received orders from the state of New York to investigate the railroads for the rebates and discounts that they had been handing out within the state. They came to find that half of their total traffic were receiving rebates, and that the vast majority of that total traffic was coming from the Standard Oil company. This particular investigation lead uncovered the volume of business that Standard Oil was controlling, but ultimately lead in a scolding of the railroad companies for permitting this to happen.

Rockefeller recognized that at this rate, it wouldn’t be long before he himself and Standard Oil would be under investigation. In response, he developed a few work-arounds so that he could hopefully continue to grow the company without attracting too much attention.

In 1882, they pooled the companies that they had either built or bought out across the country and combined them so that they would now be under the control of a single group of 37 stakeholders, which then placed their shares in a trust of 9 trustees. The trustees included the Rockefeller brothers, John and William, along with some of the original founders and a few others.

8 years later, the American Congress passed the Sherman Antitrust Act by an overwhelming majority. This act was created and passed to prevent any business or organization from conspiring to monopolize an industry through restraining trade. Though that phrase seemed to have a loose or subjective meaning within the verbiage of the act, this gave power so that the Ohio Attorney General could conduct a thorough investigation of Standard Oil.

Though it wasn’t until 1911 when the United States Justice Department dug in their heels against Standard Oil At this point, the company was in control of 85% of all final oil sales that occurred domestically within the United States. The federal government not only sued Standard Oil for their disobedience against the country’s antitrust laws, they also made an order for standard oil to breakup into 34 separate companies.

Expansion Before the End of Standard Oil

Before the Sherman Antitrust Act worked to disband Standard Oil, they had expanded outside of the US and built sizable business in international markets. They extended their business into China, marketing kerosene for lamps. They were able to carve out their niche by marketing themselves to Chinese farmers, offering a better fuel to burn than the vegetable oil that they commonly used before them. Before long, China had become their biggest client in Asia. Meanwhile, they had built partnerships in the Middle East as well.

Standard Oil As We Know it Today

Despite Standard Oil becoming dismantled by antitrust legislation, their legacy still lives on today. Standard Oil was broken into dozens of oil and gas and pipeline companies. ExxonMobil, Chevron and Marathon Oil are some of the most notable companies that remain in business today. Business experts and historians believe that had the company not been disbanded, they would be worth in the range of $1 trillion.

Though the disbanding of Standard Oil is something that has long passed, it is still something of controversy. There are many people that don’t believe that Standard Oil was a monopoly. In fact, there’s a large group of experts that believed that what they were doing was great for the oil business and the economy, pushing them and other companies to create a superior product at competitive prices. In fact, many economic historians believe that the company was in the process of losing their dominant position in the market during the time the antitrust legislation was being passed. This was due to the fact that other large oil companies such as Texaco, Shell, Gulf Oil, and others were on the rise and some of them were beginning to vertically integrate as well.

Where is the Rockefeller Family Today?

There are over 150 blood relatives of John D. Rockefeller Sr. alive today. Though some individuals who are close to the family have noted that they don’t believe that the remaining funds in the trusts will be able to sustain the current living generation of Rockefellers, or that it will begin dwindling soon.

That’s of course difficult to believe considering that in 2016 it was estimated that the remaining family fortune was $11 billion.

The History of Petroleum in the United States