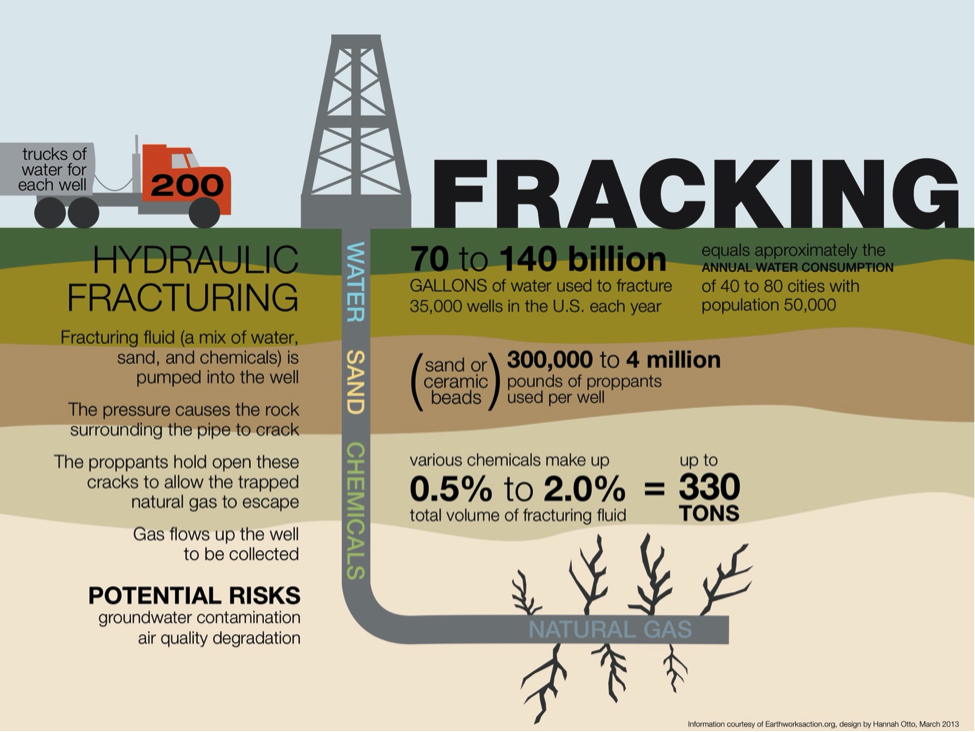 Hydraulic Fracturing — otherwise known as hydraulic fracking — is a mining and drilling technique that has garnered much attention in the news over the past two decades or so. From its humble beginnings over a century ago to an often-misunderstood global practice, fracking has received its fair share of criticism. But, what is fracking, and where did it come from? These questions are important to consider when learning about this technique,

What Is Hydraulic Fracking?

Hydraulic fracking is a method of drilling that involves pumping liquid (typically water, but not always), sand and other substances underground into vertical and horizontal boreholes The resulting pressure created by this influx of liquid creates and exacerbates fissures and cracks, forcing open subterranean layers of rock. The sand acts as a prop, keeping the forced layers of rock open, which allows the easy release of oil and natural gas, which rises to the surface and is then collected.

The environmental effects and overall safety of this drilling technique have been hotly debated for years now, but the history of fracking goes back much further than that.

What Is the History of Hydraulic Fracking?

As Geo ExPro tells us, early recorded instances of what would eventually turn into fracking go back as far as 1857 when, on a farm in Canadaway Creek, New York, Preston Barmore had a gas well that was not producing as much gas as he would hope. He theorized that the gas was having a difficult time escaping the well due to blockage. To create a larger opening, Barmore lowered gunpowder down the well, and then ignited it with a red-hot iron tube. The resulting explosion greatly increased the flow of gas from the well.

Although there was no liquid involved in that incident, or similar ones, it paved the way for future hydraulic fracturing because it employed and proved a valid theory: using pressure to increase well production.

In 1865, Colonel Edward Roberts invented a new method that he and his brothers called “superincumbent fluid-tamping,” an idea which came to him after watching artillery shells explode in water during the Battle of Fredericksburg, Virgina, according to Business Insider. This method used the same concept of pressure-by-explosion, but used water as a medium to alter the explosion in several ways. First, it helped to evenly distribute the pressure created by the detonation, ensuring that the entire area was affected. Secondly, it helped to dampen the explosion and stop any debris from flying back up through the borehole, which created a safety hazard for those on the outside. Third, it enhanced the explosion.

In addition to creating this technique, Roberts also invented a nitro-glycerine torpedo that he used in place of gunpowder. This helped to create a more reliable and controllable explosion than could be expected with powder alone. This is considered by many to be the actual start of what is now known as hydraulic fracturing.

The Rise of Modern Hydraulic Fracturing

Even though this process was used as far back as the 1860s, it wasn’t really used at all until the 1940s. During that time, a Stanolind Oil worker named Floyd Farris suggested that using liquid to fracture a rock formation could help to increase the productivity of the rocks and wells in question.

This was put to the test in 1947 (note: a full 80 years after Edward Roberts did it!) when the first modern commercial application of the theory took place in Kansas. For this use, over a thousand gallons of napalm and naphthenic acid were mixed with sand and gasoline. This mixture was forced into a rock formation under the No. 1 Klepper well in Hugoton Field. Needless to say, it worked.

Fracking was put to an even larger scale test just a couple of years later in 1949, when Halliburton Oil Well Cementing Company acquired an exclusive license to use this process. Over the course of the next year, fracking was used on over 330 wells, this time with a combination of crude oil, sand and gasoline. The results were promising: on average, the 330 wells increased their production by as much as 75%.

In 1953 companies started to use water for the liquid, and over the next few years many different combinations of water, sand and various chemicals were tested to try and figure out the best overall combination.

By the late 1960s fracking was basically a standard practice all over the United States, but it was used primarily on easy-to-reach oil and gas deposits.

As fracking grew in popularity and use, different companies discovered different techniques to make it even more efficient. One important discovery was the use of horizontal drilling, allowing the company to access more of a particular rock formation at any given time.

This technique was very important because it eventually led to a breakthrough when it came to using fracking on shale. Shale is a rock formation that keeps hydrocarbons packed together in very tight formations. Standard fracking at the time simply didn’t produce the amount of pressure needed to crack these formations. Horizontal drilling was one of the first “newer” techniques that provided promise when it came to fracking in shale.

In the mid 1980s, Mitchell Energy out of Texas finally developed a solution to fracking in shale, combining horizontal drilling with the use of “slick” water. Slick water is a low-viscosity type of water that, due to its extreme thin-ness, makes it very easy to move very quickly. In short, the use of slick water allowed Mitchel Energy to force even more water into the horizontal drill spots in a shorter amount of time, creating intense pressure that finally cracked open the shale formations and released the natural gas within.

In 2002, Mitchell Energy merged with Devon Energy, creating a large company that employed fracking techniques on shale across a large portion of the US. The quick expansion of this technique forced fracking into the public eye, where it was met with skepticism.

Fracking is not without its side effects. The process creates microearthquakes (which are less than a three on the Richter scale and are virtually undetectable) but has been linked to a few larger earthquakes as well, most notably a 5.7 in Oklahoma in 2011. In addition, many in the public worry that injecting large amounts of chemicals underground can lead to damage to the ecosystem and a tainted water table, which could affect millions of people in the surrounding area. The US government has conducted a number of studies over the possible contamination of local water supplies due to fracking. So far, none of them have shown the fracking process to have any significant impact on local water tables or other environmental concerns.

The Future of Fracking

It’s safe to say that hydraulic fracking will remain a controversial topic going into the future. As federal priorities shift and regulations change, many will question the safety of the process and the validity of the studies that support it. Meanwhile, companies all across the US continue to use fracking successfully, which has helped turn the US into an even more powerful player on the global energy scene.

Whatever the future of fracking might hold, it’s safe to say that this process has transformed how companies look for oil and gas in the US and abroad, and has changed how the world finds its energy.