In the second installment of The Harding Family Stories – The Torch is Passed, the focus is on Andrea Harding, Nicholas’ daughter. Andrea is about to head off to Duke Law School when she learns of a brutal attack on her father and uncle, Michael who now lay in a hospital near death. It falls to Andrea to take over the family business, Harding Industries. When Andrea herself is attacked, it becomes clear that someone is trying to destroy the Harding family.

Through family friend Beth Cowling, Andrea meets Deirdre Southington, an heiress and former National Security Operative whose favorite form of transportation is her private rail car, the Liburnia. Deirdre is a forensic psychologist who specializes in dealing with evil and dangerous people.

Suspicion is cast on a short list of family friends and colleagues, and longstanding relationships are put to the test. Along with her new allies, Andrea urgently seeks answers to why anyone would want to kill her entire family – growing up along the way – and seeking her revenge.

Brimming with plot twists, unexpected decisions, and recurring threats to relationships, The Torch is Passed is a tantalizing read with historical references including a subplot involving an old land deal setup by John D. Rockefeller’s Standard Oil Company over one hundred years ago that involves the Harding family. 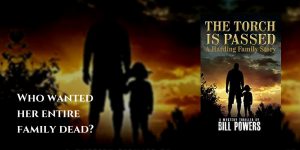