← Snow in St. Petersburg! How To Get The Most Out Of Writers Conferences →

The Viking Ingvar arrives at its final port early the morning of October 19th and we awaken in St. Petersburg. It’s not quite as cold as it was in Moscow, maybe 45° F, but there is something we have seen very little of in Russia – sunshine! It’s a lovely day, and it’s going to be a long one as well.

We had opted for a “Behind Closed Doors” tour of the Hermitage museum, which is housed in the Tsar’s former Winter Palace. It was a long day – the tour lasting 8 hours. Our guide informed us that if one were to spend one minute in front of each item in the Hermitage, it would take 11 years to complete your visit! But if you ever find yourself in St. Petersburg, go for it! 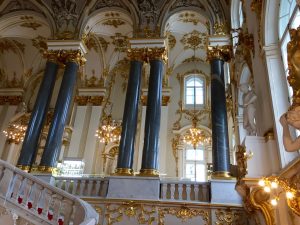 One of the many gilded staircases inside the main building of the Hermitage. 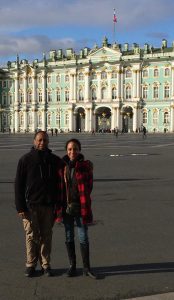 My daughter and me standing in front of the main building, keep in mind that this was once a palace – a home for the Tsar’s family! 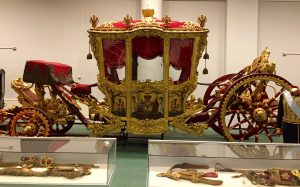 After touring the main building that is open to all the public, we walk across the courtyard to the annex/archive and are shown into numerous vaults to see items that are not on regular display; such as dozens of royal carriages that were used during coronations, gifts that were given to Catherine The Great that she had put into storage, clothing, weapons and more. 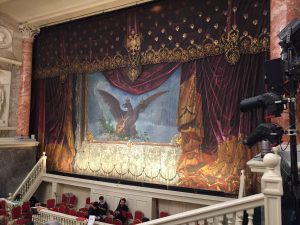 We were exhausted by the end of the day, but there was more. That evening we had arranged to attend the ballet in St. Petersburg, a performance of Swan Lake at a small private theatre inside the Hermitage (formerly a private theatre for the Tsar’s family). Note the double-headed eagle on the Russian great seal on the curtain – so it could protect Russia from it’s enemies coming from both the east and west. 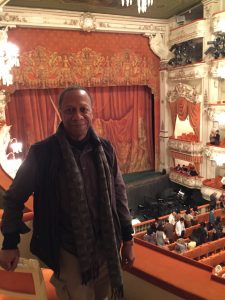 Two nights later, we went to see another ballet – La Sylphide at the Mariinsky Theatre.

A great experience, but there’s more – the last couple of days were even better!